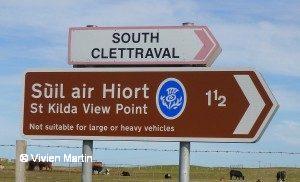 For some people ‘space’ will always be the final frontier. For the Romans it was the north-east of Scotland. For me it’s St Kilda; that group of tiny, rocky islands, lying 40 miles west-northwest of North Uist in the Outer Hebrides.

The islands – often little more than sheer cliffs rising straight out of the Atlantic – were inhabited from prehistoric times until 1930, when the final 30 islanders requested evacuation. The main island is Hirta, or in Gaelic ‘Hiort’. No-one is quite sure what the name originally meant, but it’s possible that it’s a very old Irish or Gaelic word for ‘west’.

St Kilda information board from on North Uist

Another possibility is that the name means ‘shepherd’ or ‘herd island’. Certainly there is nothing further west than America! And the islands did support herds of soay sheep, along with an amazing abundance of bird life.

When still inhabited most of the islanders lived in Village Bay and, with permission, it’s possible to camp there today. The islands are managed jointly by the National Trust for Scotland, Scottish Natural Heritage and what can seem like a strange bedfellow, the MoD (Ministry of Defence).

Although I’ve visited a great many Scottish Islands, I’ve not yet been to St Kilda. It’s not an easy journey, and bad weather has put paid to our attempts to get there in the past. But if you’re especially lucky you can sometimes see it from North Uist, and it’s incredible to think that some people have been able to look across a distance of 40miles and capture the archipelago in a photograph! While we could see several miles across the water, and the lens of my camera even further, we could only imagine the jagged outcrops in the far distance.

A new St Kilda Centre, Ionad Hiort, is to be built at Mangurstadh near Uig on Lewis, and will stand upon the magnificent cliffs there. Ever since reading Archie Roy’s All Evil Shed Away I’ve wanted to get to St Kilda and one day I hope to actually reach that ‘final frontier’ – and to set foot on St Kilda for myself!