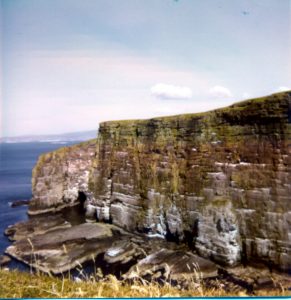 My first visit to Handa Island was in 1977, more than thirty years ago now.  Two things in particular fascinated me about Handa’s history. One was that long ago families from the mainland brought their dead to be buried on Handa to keep the graves safe from scavenging wolves.  The other that the island had had its own ‘parliament’ presided over by the eldest widow, the ‘Queen of Handa’, and that the islanders held daily consultations to decide the work to be done that day. It seemed wholly appropriate that the people who lived there were the ones who took the decisions that most closely effected their lives.  And took those decisions as a community. Sadly, like so many Scottish islands and so much of the Scottish Highlands, Handa ‘lost’ its people in the mid-19th century and has been uninhabited since.

But its wildlife still flourishes!  I remember vividly that sense of amazement on experiencing at first-hand the sight – and sounds – of the soaring sea-cliffs with their thousand upon thousand of nesting birds: the reality exceeding anything we’d imagined.  In particular the unforgettable puffins, who seemed far more sedate than many of their more raucous neighbours!  Handa is well-managed by the Scottish Wildlife Trust, with more than 5,000 visitors a year.  And there was good news for all those visitors: to help cope with such an annual influx a new eco-toilet has been built on the island, aptly named “The loo with a view”