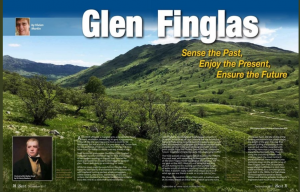 For those living in the Central Belt of Scotland the countryside is never far away. Despite being the area with the highest population density in Scotland (3.5 million out of 5.4 million), it doesn’t take long to reach the clean air and open spaces of the countryside.

For many of us, heading north or west leads to the Trossachs, an area of woods, glens and lochs that lies within the Loch Lomond and Trossachs National Park. And right in the middle of this expanse is glorious Glen Finglas.

Made famous by Walter Scott (as with so much of this part of Scotland), Glen Finglas has never lost its popularity, and today is managed by the Woodland Trust for Scotland. But it’s also part of ‘a forest in the making’, the Great Trossachs Forest, a long-term project (200 years!) that aims to create 160 square km of native woodland across this area. This innovative and far-sighted venture is the brainchild of the Forestry Commission Scotland, RSPB Scotland and the Woodland Trust.  Described as a ‘forest for the future’, the Great Trossachs Forest is also the largest National Nature Reserve in the country. Quite an achievement. 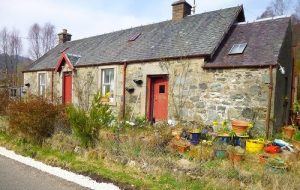 A cottage in the village of Brig O’Turk, Glen Finglas

While this work is being carried out in the present and will provide great benefits for the future, Glen Finglas has a long and varied past. And it’s this past that has shaped the landscape we see here today.

In the current issue of iScot magazine I’ve written about the past, present and future of Glen Finglas under the headings found on the unusual stone compass that’s set into a rocky hillock up the glen. Carved into the stone are three mottoes: Enjoy the Present, Sense the Past, Ensure the Future. It’s a wonderful encouragement to get out and walk (or cycle), to learn about the people and events that have gone before and to discover what is planned for future generations.

To find out more about what this all entails, get hold of a copy of September’s iScot and then be inspired to pay a visit yourself!