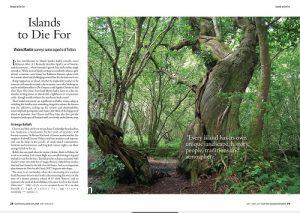 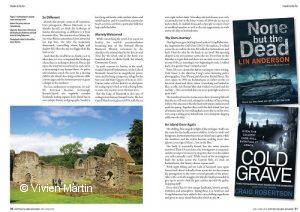 Last weekend the Isle of Bute basked in sunshine, its worthy citizens little realising that a ferry-load of mass murderers, psychopaths and serial killers (both male and female) were about to set foot on their beloved island: unaware that a gang of killers was about to hit the streets of Rothesay, the capital of this peaceful west coast island.

From California to Govan they came, each with their own unique and perfected methods of murder. Each with their own preferences for death and carnage. But thankfully on this occasion no blood would be spilt, for these desperadoes kill not with daggers or guns, but with the pen!

Thus it was that journalist-turned-crime-writier Craig Robertson and his band of Tartan Noir friends arrived on the island for the first ever Bute Noir crime writing festival and what a success it was!

Organised jointly by Craig, along with Karen Latto of Print Point (Rothesay’s wonderful bookshop) and the library’s Patricia MacArthur, the talks were hosted across three venues: by Karen at Print Point, by Kevin Baker at Rothesay Library and by Anne Spiers at Bute Museum.

Library staff kept us all fed and watered!

The topics ranged from the serious to the comic – from the grim reality that lies behind much of crime writing, to “squirrels on steroids, heads in fridges and the perfect writing paper…!” to quote the island’s newspaper, The Buteman.

The visiting authors looked at what lies behind the personalities of serial killers; discussed the way different women approach crime writing (‘Deadlier than the Male?’);  debated the extent to which locations add to the realism of a novel; talked about the writing of the ‘cosy’ crime novels that many readers also appreciate; then brought the festival to a hilarious finale with a ‘Question of Court’, when Chris Brookmyre, Luca Veste and Michael J. Malone pitted their wits and literary knowledge against the sharp minds of Caro Ramsay, Douglas Skelton and G.J.Brown.

Prepare to be afraid, very afraid!

The island played its part too as the Bute Noir programmes and posters all featured the atmospheric and eerie photograph of the road to the Dhu Loch, taken by talented Bute photographer John Williams. The evocative image of a dark and winding road through trees, leading to an unknown and mysterious destination, was just the thing to get your imagination going and send a shiver or two down your spine!

This inaugural Bute Noir was a good mix of gentler crime, alongside police procedurals and the darker Tartan Noir: with a slice of the mysterious and the supernatural thrown in as well. The turnout for all the events showed just how much interest there is in all aspects of the process of writing – from the original spark of an idea to the final published book.

All in all, a great success and if you missed meeting these dealers in death this time round: fear not – They’ll be back!!

Find out more at:

How unique is Scottish Crime Fiction by Allan Martin