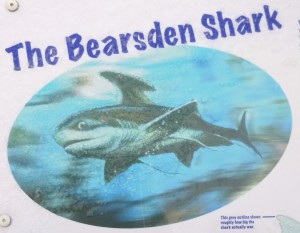 Walking alongside the Manse Burn as it flows through Baljaffray to the north of Bearsden, it can be hard to imagine that 330 million years ago the land here not only lay close to the Equator, but was covered in tropical lagoons and teeming with marine life!  But thanks to Bearsden’s oldest known resident – the Bearsden Shark – it’s possible to know what kind of creatures lived here and what sort of environment they lived in.

The first indication that the Manse Burn was a rich source of fossils came in 1981 when a young boy found something that he couldn’t identify and took it to Stan Wood, a local fossil expert. 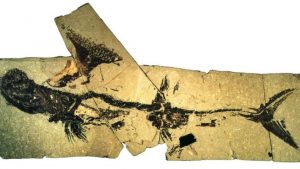 The Bearsden Shark fossil can be seen at the Hunterian Museum in Glasgow, while a replica is now on display in Bearsden Library

Not long after, the Hunterian Museum of Glasgow University organised an excavation and began to unearth an abundance of fossils which eventually included the most complete and best preserved fossil shark of its kind in the whole world!  In fact the area along the Manse Burn turned out to be so rich in fossils that it was declared a Site of Special Scientific Interest (SSSI) and is one of the best Carboniferous fish sites anywhere.

From the reconstruction it’s easy to see that it was a strange looking beast and scientists have discovered that not only did it have teeth in its mouth, but also along the top of its head and around its distinctive dorsal fin!!  A formidable foe indeed!

It was identified as a male shark belonging to the group known as Stethacanthidae: and not only was the Bearsden Shark fossil complete – or as ‘complete’ as a fossil can be – but it was so well preserved that it was possible to identify muscles, blood vessels and even his last meal!  However, even though unearthed forty years ago, it took nearly twenty years to finally decide that it was indeed a new species and in 2001 it was given the name of ‘akmonistion zangerli’: though most people (understandably) still refer to it simply as the Bearsden Shark! 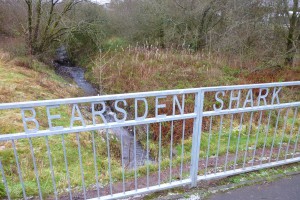 The new ‘Bearsden Shark’ fencing across the Manse Burn in Baljaffray

Such is his fame that he has had a poem composed about his life (The Bearsden Shark by Edwin Morgan), as well as a number of PhDs written in his honour! And thanks to the work of the Bearsden Shark Group, volunteers who have done so much to keep the shark in the public eye, there’s now a cairn and information board beside the Manse Burn in Baljaffray. The board, which marks the shark’s importance in our understanding of life all those millions of years ago, was unveiled by Dr Neil Clark, curator of Palaeontology at Glasgow University’s Hunterian Museum, whose reconstruction of the Bearsden Shark is shown above. 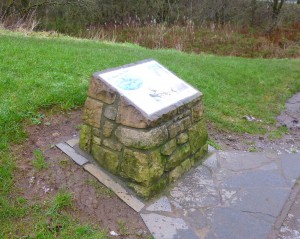 The cairn and information board beside the Manse Burn

And should you visit the library in Bearsden you’ll be able to view the display set up by the Bearsden Shark Group, complete with a replica of the fossil. You can also buy a small booklet telling his story.

So there you have it. A cold-blooded killer from the Carboniferous Era, our shark, like millions of other creatures “softly and suddenly vanished away”.  So suddenly in this case that he didn’t have enough time to fully digest his final fish supper – made up of shrimps! – but nonetheless he did leave a lasting legacy from 330 million years ago.  Not bad for a Bearsden Boy!

The Bearsden Shark by Edwin Morgan