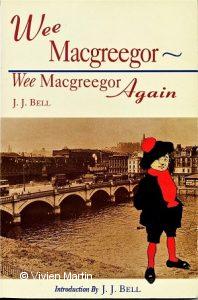 He was once a character known the world over, yet today Wee Macgreegor is little more than a footnote to Scottish literature. First published in 1902, the tale of wee Macgregor Robinson and his family made writer and journalist J J Bell (John Joy Bell), an overnight sensation.  Wee Macgreegor soon featured in many other novels, and was so popular it wasn’t long before he became a brand – on matches, china, biscuits, tablet, lemonade and even sardines!

John Bell was the son of a prosperous Glasgow tobacco manufacturer and enjoyed all that that entailed. After university John briefly joined the family firm, however writing was his real passion and, with his father’s blessing, he began writing for newspapers and magazines. But just as John’s star began to rise, his father’s company sank upon the rocks of American competition in the trans-Atlantic battle for supremacy of the vastly profitable tobacco trade. 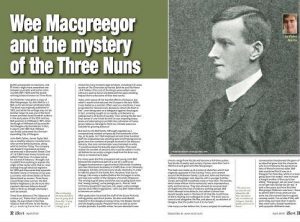 An unassuming man, Bell was surprised, but pleased, when the books were dramatised for stage, radio and cinema. In 1911 Arthur Wareing, director of the Glasgow Repertory Theatre, suggested Bell adapt some of the stories for his company to perform. The Glasgow Rep had been established in 1909 in an attempt to break the stranglehold which the London touring companies had gained in Scottish theatres. Sadly, the company would be short-lived, falling victim to the wave of theatre closures caused by the outbreak of World War One. 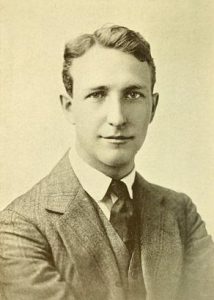 However, working with a young American producer and playwright, Harold Chapin, Bell had the play ready by December 1911. Finding a boy to play the part of Wee Macgreegor wasn’t easy. But one of Bell’s former Evening News colleagues came to his aid, finding ‘a likely lad’ for them. This was Willie Elliot, a messenger-boy, a small fourteen-year-old, who although he had no ambition to become an actor, was able and intelligent and made a successful job of the part. Both Harold Chapin and Willie Elliot would later be caught up in the First World War, Chapin volunteering for the medical corps and losing his life in 1915 at the Battle of Loos. While Willie Elliot, although wounded three times, survived that bloodbath and after the war left Scotland to start a new life in Canada.

In 1923 a silent film, Wee MacGregor’s Sweetheart, appeared. The film told the story not of the eight-year-old boy, but the young man and was based on two later stories, Oh! Christina and Courting Christina, with the role of Christina played by Betty Balfour, one of the best-known actresses of the day. Betty Balfour was known as the ‘British Mary Pickford’, and worked in Germany and France, as well as appearing in one of Alfred Hitchcock’s earliest films, Champagne (1928).

I found it fascinating trying to track down the people, places and events that were part of J J Bell’s life. While he seems to have been a very quiet, almost reserved man, his writing brought him into contact with people from all walks of life. Up until his death in 1934, Bell continued to contribute to newspapers, was a theatre critic, produced some autobiographical volumes and wrote widely about Scotland, most notably The Glory of Scotland (1932) and The Rainbow West (1933). 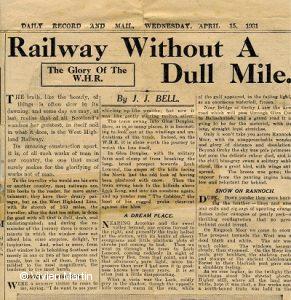 One of his favourite, and oft-repeated journeys, was on the West Highland Railway up to Fort William and on to the fishing port of Mallaig. The growth of railways had opened up parts of Scotland that had previously only been accessible to the very wealthy. Now travel was there for all.

Bell’s love of Scotland was great, and he felt very strongly that, for all of us, personal knowledge of our land was important, “for after all, we ought to know for ourselves – not depending entirely on Sir Walter Scott – the land we love.”

And as for the mystery of the three nuns? You’ll have to read the iScot article to find the answer to that!!