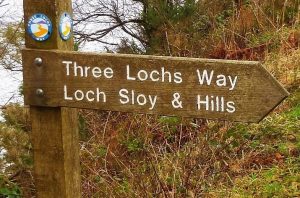 It was freezing cold, with snow in the air and on the hills, and colder the higher we went. But, as so often when walking in Scotland, we knew the destination would be worth it. And that destination was the Loch Sloy dam, flanked by the mighty and rugged Ben Vorlich.

Parking at Inveruglas Visitor Centre on the west bank of Loch Lomond, we followed the signposts for Loch Sloy & Hills, which took us past the impressive Loch Sloy Hydro-Electric power station. Construction of the dam began in May 1945 and was the first in the North of Scotland Hydro-Electric Board’s revolutionary scheme. Work was completed in 1949 and the station officially ‘switched on’ in October 1950. The construction work was back-breaking and dangerous, with twenty-one men losing their lives in the process. 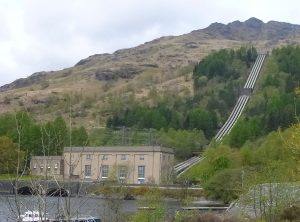 The dramatic history of ‘Power from the Glens’ has long interested me. The water for this power station comes from Loch Sloy, high in the hills, with its massive dam, 56 metres high and 357 metres long. From here it is channelled through a 3km tunnel, hewn through of the massive side of Ben Vorlich. On reaching the valve house it thunders down through four mammoth pipes to drive the turbines below.  Such is the power of the water that the station can generate enough electricity to meet sudden peaks in demand, reaching full-capacity within 5 minutes of a standing start!

It’s a straightforward walk, a round-trip of 11km. When you reach the access road to the dam, walk under the railway bridge and then it’s up! And the higher you go, the better the views of Loch Lomond and the surrounding hills become. The construction of the Loch Sloy dam and power station was, quite literally, a groundbreaking start to one of the most progressive and far-reaching engineering projects in the world. So when you reach the dam, take a look at your map, and wonder at how it was possible, all those years ago, to carve such tunnels through these mountains. Some of the work force were even prisoners-of-war awaiting repatriation. In a booklet published by Scottish Hydro Electric, due credit is given to these men: 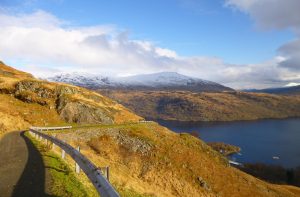 “After the Second World War, men from all over Scotland came to work on the schemes, attracted by high wages. The highest wages were earned by the men who dug the tunnels. Germans, Poles and Czechs were acknowledged to be skilled tunnellers. They became known as the ‘Tunnel Tigers’ because of their cavalier approach to safety in their quest to earn the huge bonuses that were available. The lower regard for health and safety issues than there is today inevitably led to high accident rates and deaths amongst the workers. No definitive accident statistics exist, but in one camp alone, which housed some 1,000 workers at its peak, there were 22 deaths in just one year. For the vast majority of workers the rewards were great. In the late 1940s, a ‘Tunnel Tiger’ could expect to earn up to £35 a week, compared to £3 or £4 for a Highland estate worker. Mostly they lived in temporary work camps built near the construction sites. Not surprisingly, the sites looked like military camps, sometimes housing up to 3,000 men.” 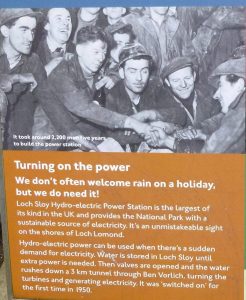 The scheme was masterminded by Scottish politician Tom Johnston (1881-1965) and, under the auspices of the North of Scotland Hydro-Electric Scheme, succeeded in bringing power to the glens in a way never before imaginable. By 1963 90% of the Highlands were attached to the grid, more than twice as many as when the scheme began just after the Second World War. ‘Power from the Glens’ ultimately changed the face of rural Scotland and the benefits continue to this day.

Their achievements are all the more remarkable given the harsh conditions and often unforgiving terrain they had to work in, and we owe them a great deal. For not only is Scotland a country of great natural beauty, but it’s also one rich in natural resources. And so it’s doubly remarkable that Tom Johnston and his fellow visionaries harnessed hydro-power without damaging the landscape, and also left dams and power stations of great stature and beauty.

As renewable and sustainable energy become increasingly important, the hydro-power schemes these men bequeathed us become equally more significant. We need renewable energy like hydro-power: and in a country of rivers, lochs and plentiful rain, hydro-power is definitely here to stay! 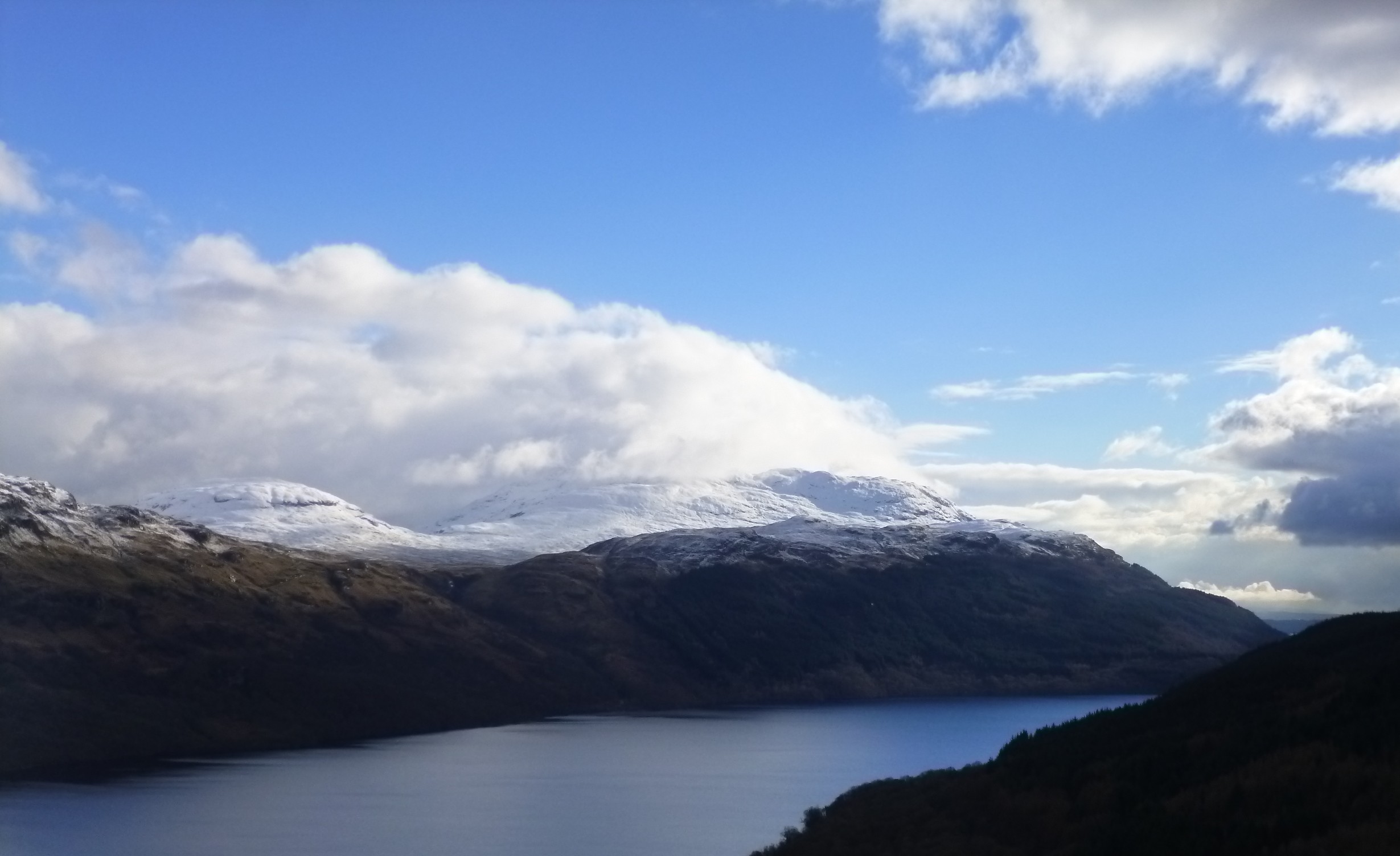 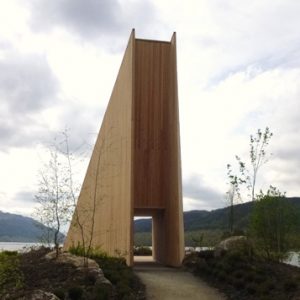 ‘An Ceann Mòr’ or ‘The Great Headland’: the dramatic new pyramid-shaped viewing platform at Inveruglas on Loch Lomondside

Ask most people to name a place in Scotland that they’ve heard of and chances are they’ll come up with Loch Lomond and the Trossachs. What Walter Scott set in motion all those years ago with his poem The Lady of the Lake continues today. And with good reason. A National Park since 2002, Loch Lomond and the Trossachs is possibly one of the best-known areas of Scotland. Natural beauty, lochs and mountains, hills and glens –  the Park has them all: and a-plenty.

When the Scottish Government launched its first Scenic Routes competition, there was a wealth of entries. Young architects from all over submitted pland for special installations, designed to enchance particular areas in the Park. The four winning entries were duly built and have become popular and much-loved sites for visitors.

It’s not often you associate the Scottish countryside with pyramids, but Loch Lomond now has a splendid one!  An Ceann Mòr, Gaelic for the Great Headland, is one of four installations that marked the inaugural Scottish Scenic Routes project.  Funded by the Scottish Government, the four new landmarks were specifically designed to highlight features of much loved areas of Loch Lomond and the Trossachs National Park.

The challenge to take a beautiful and much-loved spot and succeed in enhancing it has been at the heart of the Scenic Routes competitions, and it’s a challenge  talented young architects have risen to with resounding success. The winning designs are all very different, but have one thing in common; they make you stop, think and see a familiar scene in a new way. 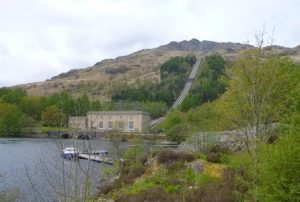 Our first stop was the striking pyramid, An Ceann Mòr, which sits high above the loch close to the Inveruglas Visitor Centre, with stunning views down towards Ben Lomond and over to the Arrochar Alps. But that’s not all you’ll see as you stand on this beautiful wooden structure. You’ll find your eyes drawn to another distinctive landmark, the Loch Sloy Hydro-Electric power station. How often do we drive past it without giving it a second thought? And yet its construction was part of one of the most progressive and far-reaching engineering projects in the world. 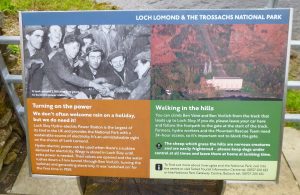 Completed in 1949 and officially ‘switched on’ in 1950, Loch Sloy produces hydro-electricity, and in a country of rivers, lochs and plentiful rain, that supply is likely to be inexhaustible! The history of its construction – which included the tragic loss of 21 lives – is a revelation.  In fact, the massive scale of the North of Scotland Hydro-Electric Scheme was unprecedented, but succeeded in bringing ‘Power to the Glens’ in a way never before imaginable. By 1963 90% of the Highlands were attached to the grid, more than twice as many as when the scheme began just after the Second World War.

The Hydro Board was the led by the Scottish politician Tom Johnston and over three decades the ‘Hydro Boys’ and the ‘Tunnel Tigers’ created generation and distribution schemes that became renowned the world over. Their achievements are all the more remarkable given the harsh conditions and often unforgiving terrain they had to work in. However, this ‘Power from the Glens’ ultimately changed the face of rural Scotland and the benefits continue to this day. 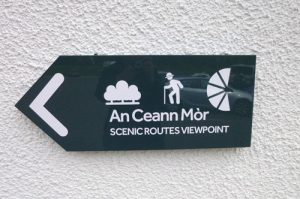 Hopefully An Ceann Mòr will be long-lasting too. It was designed by three young architects Daniel Bar, Stephane Toussaint and Sean Edwards from BTE Architects in Glasgow.  Eight metres high and with 31 steps, it is made from sustainable timber, wood which the young architects have chosen especially as it will gradually weather to a more muted silver-grey colour, blending in naturally to become part of the surrounding landscape.

Part of the landscape, but also a feature that makes us take more notice of that landscape than ever before. And that’s no bad thing at all!