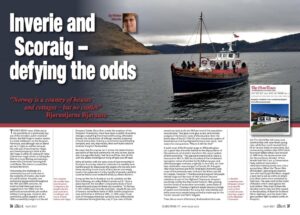 As land ownership in Scotland clings grimly to its feudal roots, there are still far too many obstacles that make it hard, if not impossible, for Scots to live on and work the land. But it’s not only who owns the land that affects people’s lives, it’s also access. Access is vital for communities to survive and there can’t be many places in mainland Scotland that are as inaccessible as Inverie and Scoraig! Yet these two communities have shown that it’s possible to defy the odds and to thrive. 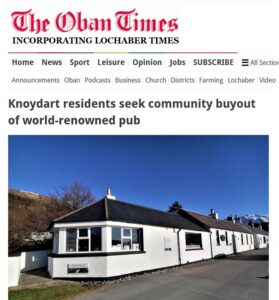 It’s not been an easy journey for either community. Neither have what we would consider ‘ease of access’, nor, until fairly recently, the opportunity to own the land they live on. However, you may have noticed that Inverie has been in the news again recently with talk of a community buy-out of the ‘remotest pub in mainland Britain’, which happens to be none other than the Old Forge in Inverie.

Inverie is a small settlement on the Knoydart Peninsula, and although not an island per se, it might as well be, because the only way of reaching the village, and thereby enjoying a drink at the Old Forge, is either by walking 15 miles (25km) over rough terrain or taking the little ferry from Mallaig and making a seven-mile (11km) sea crossing into Loch Nevis. The choice is yours! (tip: we took the ferry!)

Fortunately, the challenge of a community buy-out is not a new one for the residents of Inverie. Like much of rural Scotland, Knoydart saw continuing depopulation throughout the 19th and 20th centuries. So much so that there was even a suggestion in the 1990s that the peninsula be turned into yet another military training area. However, the community pulled together and in 1999 successfully bought out the old Knoydart Estate. Since then, under the auspices of the Knoydart Foundation, there have been a wealth of positive changes: everything from improved housing, affordable homes, the introduction of a Ranger service, expansion of local enterprises, forestry, a community owned trading company and, very importantly, their own hydro-electric scheme, Knoydart Renewables.

Scoraig likewise, saw its population dwindle and almost die out over the years.  As with Knoydart, attempts to re-populate and revive the area, particularly after the Second World War, started off with high hopes, only to come to naught because of inequitable land ownership. But Scoraig has survived, thanks in no small measure to an influx of young people in the late 1960s. Although initially greeted with scepticism, they were determined not to be defeated. 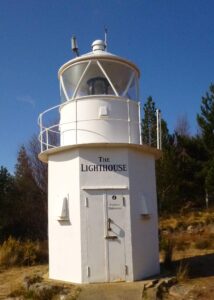 At the time theirs was labelled a crackpot ‘alternative’ lifestyle. But in reality their approach to crofting and self-sufficiency, along with the harnessing of wind power, was ahead of its time and is now seen as a way forward for the rest of us. So much so, that one of Scoraig’s residents, Hugh Piggott, who helped build many of Scoraig’s original wind-turbines, now writes and teaches on the subject and runs Scoraig Wind Electric.

The story of both these communities is a long, and at times depressing one, so out-dated is land ownership in Scotland. But perseverance has paid off and they’re inspirational stories well-worth hearing and that’s what I’ve looked at in some detail in this month’s article in issue 71 of iScot Magazine.