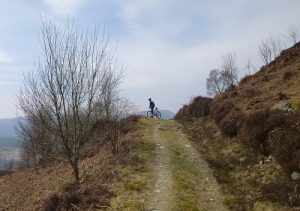 From medieval hunting parties to whisky smugglers, cattle rustlers and those incredible dam-building pioneers of renewable energy, the Hydro Boys, Glen Finglas has seen its fair share of excitement and change.  And that’s continuing today through the work of the Woodland Trust Scotland and the ongoing development of the Great Trossachs Forest.

A new information centre, the Glen Finglas Visitor Gateway, has been built at the Lendrick Hill car park and is the starting point for a whole range of walks; anything from half a mile to 15 miles. There’s also an option to follow the Great Trossachs Path itself, which runs for 30 miles from Callander all the way to Inversnaid on Loch Lomond. 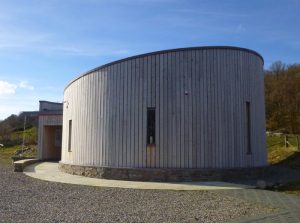 What is it makes this area so interesting? In the early 19th century that founding father of Scottish tourism, Sir Walter Scott, immortalised both the Trossachs and Glen Finglas in his epic poem ‘Lady of the Lake’ and the ballad ‘Glenfinlas’. From that point on visitors flocked to the area, drawn by the rugged natural beauty of the hills, lochs and glens.  But also by the romantic tales and legends associated with the wild landscape. 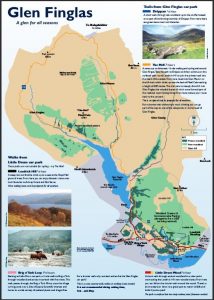 This notion of the romance of the wild saw many writers, artists and poets among the visitors, including the renowned naturalist, philosopher and social critic John Ruskin, one of the most influential men of his day, and a frequent visitor to the Trossachs. I was pleased to discover that it’s once again possible to go and stand by the rushing waters of the burn at the spot where Millais painted his famous portrait of Ruskin in1853. The Great Trossachs Forest project is not a ‘quick fix’, but an inspired and inspiring long-term plan to regenerate natural woodland and habitats. We took the Lendrick Hill and Dam walk, which, at its most northerly point, looks down on the gentle curve of the dam built in the 1960s as part of the massive Scotland-wide hydro-electric scheme. 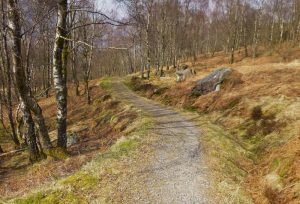 Through the woods above Glen Finglas dam

The walk ends at the delightful Brig O’Turk Tea Room*, well-known both for its wonderful food but also as a key location in the 1959 remake of John Buchan’s classic The 39 Steps. Starring the debonair Kenneth More, much of this version was filmed in and around the Trossachs.  In one scene our hero makes his escape by peddling off, hidden amongst a group of other cyclists, whilst clad in a rather improbable fashion! The cyclists we saw that day were anything but improbable and it was great to see so many people getting real enjoyment from a trip to Glen Finglas. 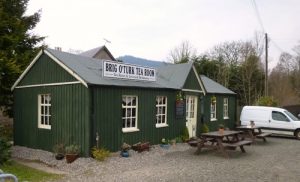