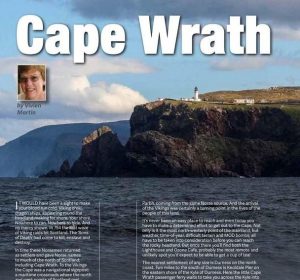 It’s genuinely remote, there are plenty of obstacles to getting there, but it can be done – and it’s definitely worth it! Time of year, weather and MOD activity in the bombardment range, all have to be taken into consideration before you set out. Once these factors are sorted, however, you’re on your way. And fear not – there will be a cup of tea waiting for you when you finally reach the lighthouse!

We felt a real sense of achievement when we visited Cape Wrath. There’s the lighthouse and the welcome Ozone Cafe, as well as the decaying Lloyds Buildings, which are described on the Visit Cape Wrath website as: “a signalling station complex established by Lloyd’s of London Marine and Commercial Insurers to monitor passing ships, tracking their cargos, ports of departure and destination along with estimated arrival times”. Built between 1894 and 1903, advances in communications led to their closure in 1932, although they were reused at the start of World War II as a coastguard station.

The decaying Lloyds Buildings, closed in 1932

The small group who travelled on the ferry and minibus with us were from all corners of the globe. There’s obviously something very addictive about getting to the (almost) unreachable parts of the world!

I’ve written an article describing the journey and the history of the Cape – from the terrifying arrival of the Vikings – those fearsome Sons of Death – through the trials and tribulations of the Clearances, to the present day set-up where the MOD own vast tracks of the land. The article is available in the April edition of the excellent iScot magazine. iScot is a wide-ranging publication, which looks at what’s happening in Scotland today: what’s going on in the news and what there is to see, do and think about in this wonderful country of ours. If you have an interest in Scotland it’s well worth considering a  subscription, whether in paper form or in a digital edition. 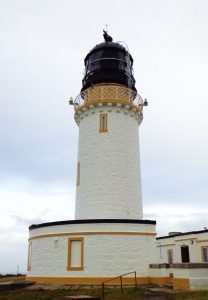 Cape Wrath was the hvarf, the ‘turning point’ for the Vikings. Life is full of turning points and our reactions to these can have a profound effect on how we live our lives and relate to those around us. At times life can be more challenging than we might prefer, but, with places like Cape Wrath to visit, at least we can’t complain that it’s dull!