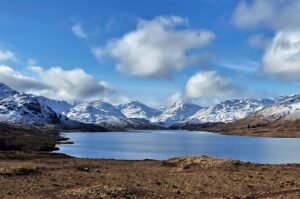 And when the hills look like these at the far end of Glen Arklet, there aren’t many better places to be!

Travelling north-west on the B829 from Aberfoyle in the Trossachs, you pass four very different lochs. There’s mighty Loch Ard, tiny Loch Dhu, slim-waisted Loch Chon – Loch of the Dogs – and Loch Arklet, lying at right angles to the rest. A short distance beyond the end of Loch Arklet you reach a T-junction and here you have the choice of turning left to Inversnaid on Loch Lomond, or right to Stronachlachar on Loch Katrine. Lochs galore to choose from!

Just short of that T-junction, we stopped to savour the view. Looking westwards along Glen Arklet, the snow-covered peaks of the Arrochar Alps rise to form a magnificent backdrop to the loch, which, like many a loch in the Highlands, is now part loch, part reservoir and linked to the hydro-electric scheme that changed life in the Highlands forever. 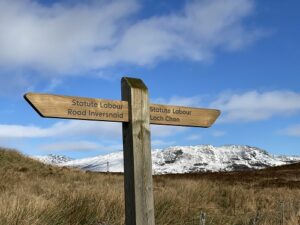 Then there’s the Rob Roy MacGregor connection – this is the Trossachs after all! Mid-way along Glen Arklet sits the tiny settlement of Corriearklet, and it was here, in January 1693, that Rob married Mary MacGregor of Comar.

Loch Arklet lies within the Loch Lomond and Trossachs National Park and on The Great Trossachs Path. There’s an excellent off-road walk from Stronachlachar to Inversnaid that runs the length of the glen. Parts of the route follow the tracks of old Statute Labour Roads and old Military Roads – so you really are walking through – and on – history! 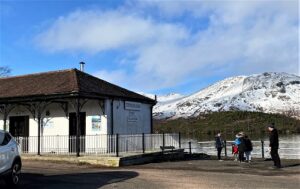 And at both ends of the walk you’ll find food! Whether at the Inversnaid Hotel or the Inversnaid Bunkhouse to the west, or the Pier Cafe to the east at Stronachlachar.

It’s a wonderful part of the country and we are very fortunate to be able to enjoy this wild landscape. Returning from a day out, you realise just how much we benefit from spending time outdoors, especially among our hills and lochs. The natural world gives us so much, and for that I am truly thankful! 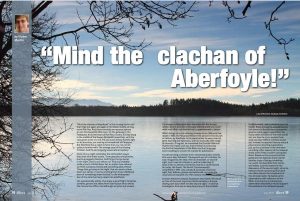 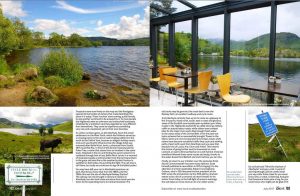 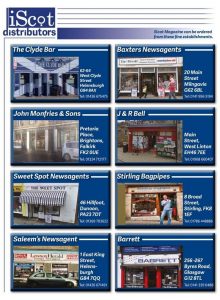