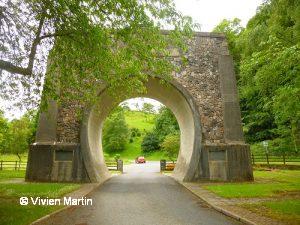 Clunie Arch, a memorial to some of the men who lost their lives building the hydro schemes

The dramatic story behind ‘Power to the Glens’ has interested me for years. So widespread was the scheme that you don’t have to go far to find a dam or power station linked to the Hydro. Wonderful feats of civil engineering, with clean and beautiful designs that leave no scars on the landscape.

The scheme was designed to bring power to the glens through the work of the North of Scotland Hydro-Electric Board (1943–1990) and was masterminded by Kirkintilloch-born politician Tom Johnston (1881-1965). Johnston was a Labour MP and Secretary of State for Scotland during WW2, and was determined to improve life for the people of the Highlands and Islands. 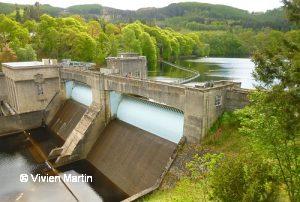 The Hydro Board was tasked with the enormous challenge of designing, constructing and managing hydro electricity projects throughout the Highlands of Scotland: an expanse that covers almost a quarter of the total land area of Britain, yet with only about three percent of the population.

However, as it’s an area with the highest mountains, largest inland lochs and most bountiful rainfall in Scotland, it definitely has the perfect ingredients required to create hydro electricity! 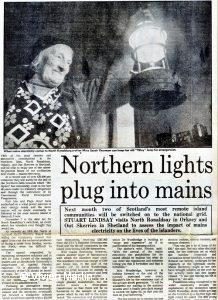 The Hydro comes to Out Skerries, Glasgow Herald, October 29 1983

Think how much we take heat and light for granted. It may be wet and miserable outside, but we know we have bright, warm homes waiting for us. Every now and then an unexpected power cut might serve to remind us what life was like before everything was available at the flick of a switch. But it’s not a situation we’d want to last for long! And I suspect most of us would be hard put to really understand what life was like before mains electricity was available throughout Scotland.

Incredibly, it wasn’t until the 1960s, and thanks to the work of the North of Scotland Hydro-Electric Board, that 90% of the Highlands were finally attached to the national grid. A figure more than double pre-war provision. And many more years passed until that connection was nationwide. It’s an inspiring story of how belief in a better society for all can change the lives of so many. If there’s a will to do so.

And Tom Johnston had that will. 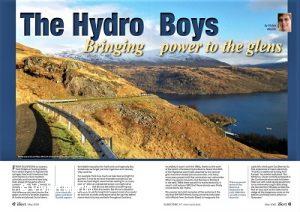 I often wonder what he and his contemporaries would make of Westminster today? Not a lot, I suspect. But without a shadow of a doubt, there’s much that today’s politicians could learn from Tom Johnston!

My article about the advent of hydro-electricity, Tom Johnston, the North of Scotland Hydro-Electric Board, the Hydro Boys and those extraordinary Tunnel Tigers, appears in issue 62 of iScot magazine. And what a story it is!