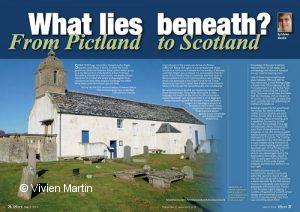 The entrance to the Basilica di San Clemente in Rome

The crypt under St Colman’s (Tarbat Old Church) at Portmahomack

The Calf Stone, a fragment of a Pictish Sculptured Stone from Portmahomack. Illustration by Elizabeth Hooper (c) University of York