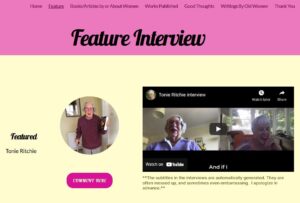 “I feel I may have come into this world with a whimper, but it looks as if I may be going out with a bang!!”

So said my 98-year-old great-aunt to me after being interviewed for an American podcast. Not that this was her first interview, nor, hopefully, the last. But there’s no doubt that the past year has been quite a roller-coaster ride for this remarkable debut novelist.

Born in 1923, Tonie Scott Ritchie has had a long and adventurous life. Married to a Naval Surgeon, she and her five children lived all over the globe. And without doubt it’s been a life lived to the full. A life, as with so many of us, filled with a never-ending mix of  joy, tragedy, challenge, bad times and good times. All ingredients that can fire imagination and creativity. As they have with Tonie Ritchie.

And that’s a great example and inspiration to everyone. No matter the circumstances, it’s never too late!

You can listen to Tonie’s interview here:  Old Women Who Write Interview 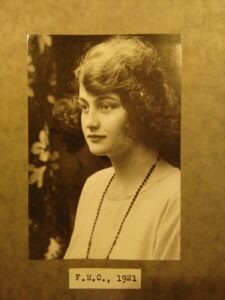 As Albert Einstein commented, “Creativity is intelligence having fun!” And being creative – whatever form that creativity may take – is a vital ingredient in life. It’s a vital ingredient whoever you are, whatever age you may be. If we’re not creative we’re in danger of becoming passive, lazy in our thinking and in our living. Creativity comes from within us, but then takes us out of ourselves. And that’s no bad thing.

It’s especially important the older we become, when much of what we once took for granted becomes less easy. When we are, unavoidably, more limited in what we can do and where we can go. Being creative makes these limitations far more bearable. 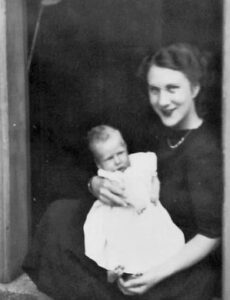 Bette Davies once said, “Old age ain’t for cissies!” And it’s true. As our bodies start their slow decline, we inevitably face a multitude of new challenges, both physical and mental. But fortunately what we mean by ‘old’ is changing. Particularly noticeable is how we look when we grow older. Previous generations aged more quickly and died younger. Life was harder, food scarcer, homes colder, daily chores more draining, families larger, health care more limited. But now we live longer and we have the means, and the freedom, to look and dress very differently. Dress codes have changed dramatically. I don’t think my grandmother ever wore a pair of trousers in her life, my mother sometimes did, but I seldom wear anything else. And you have to ask yourself, why did it matter so much? 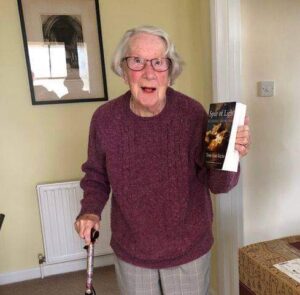 There are two members of my family who’ve certainly proved that being creative doesn’t have a sell-by date. One is my great-aunt, who at the age of 97 completed the manuscript of a novel, Spur of Light, which was published last November as both an ebook and a paperback! That’s been a huge boost to her both mentally and physically. Good news tends to have that effect!

Another long-lived relative of mine, was the poet Flora Garry (1900-2000). In the 1940s she wrote plays and was an occasional contributor to national papers. This was also when she started to write poetry, often in the local Buchan dialect, but it wasn’t until she was in her seventies that her first collection was published, with her final collection appearing when she was 95. At the age of 98, she was made a Master of the University of Aberdeen, the principal, Professor Duncan Rice, visiting her in her retirement home in Comrie, to confer the honour on her. 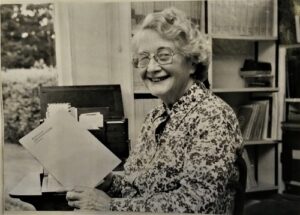 Like Tonie, and my grandmother Eveline Kellas, all three of them strong Aberdeenshire women, Flora remained creative and firing on all cylinders until the very end. So while there may be some who feel that age devalues us, I certainly don’t agree. Nor did Flora, whose self-penned epitaph read: “Here lies Flora Garry much against her will.”

The relationship between aging and creativity is a fascinating and complex one. Much wider, and, I believe, more important, than we often realise. And one that I look at in this month’s iScot article: It’s Never too Late! And that goes for us all! 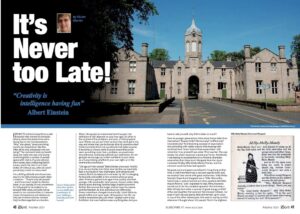 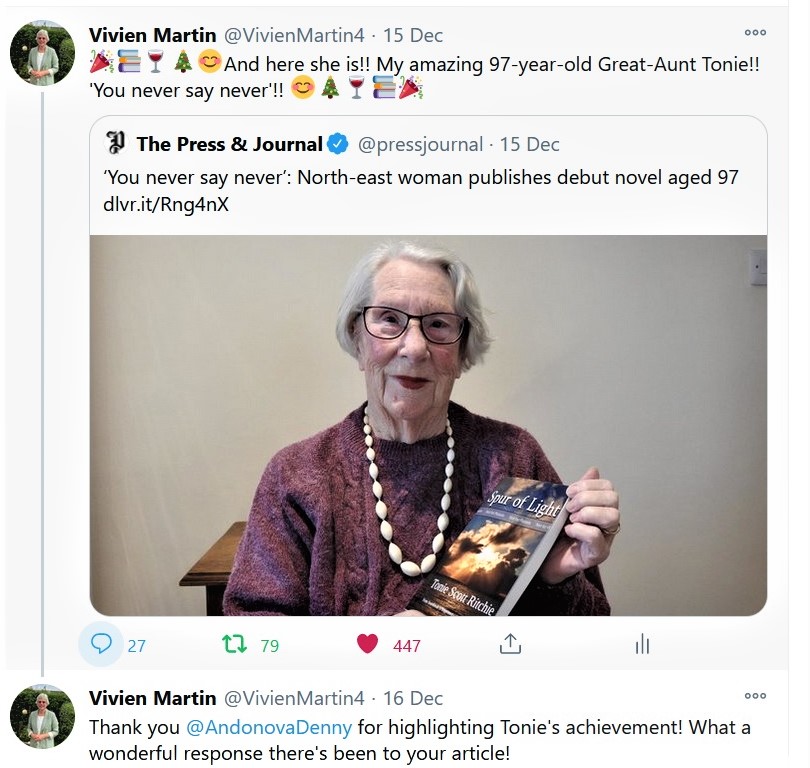 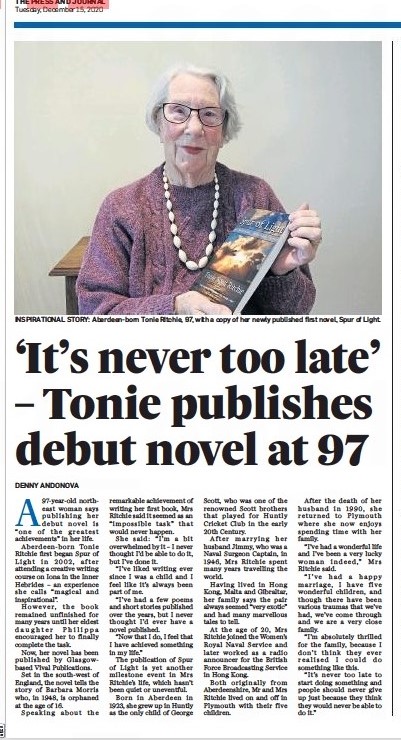 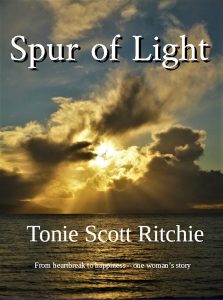 I created a new hashtag on social media yesterday, #NonagenarianNovelists. I created it to celebrate the publication of a debut novel written by my amazing 97-year-old great-aunt! Aberdeen-born and Huntly-bred, Tonie Ritchie completed her first novel this year. A great achievement for anyone, let alone a nonagenarian!

The novel, Spur of Light, was begun after attending a creative writing course on the Scottish island of Iona in 2002, but lay unfinished for many years until Tonie’s eldest daughter encouraged her to finish it and now, at the age of 97, she has finally completed the task.

Tonie’s life certainly hasn’t been quiet or uneventful. Just the opposite in fact. And perhaps that’s where some of the ideas in her novel came from! She was born in Aberdeen in 1923 and grew up in Huntly, attending Gordon School until she was 16. She then worked for the Clydesdale Bank before joining the WRNS (Women’s Royal Naval Service) in 1943. She lived in Hong Kong, Malta and Gibraltar with her husband Jimmy, who was a Naval Surgeon Captain, and while in Hong Kong she worked for BFBS (British Forces Broadcasting Service) as a radio announcer. They had five children – at one point she was left looking after them all plus two aged parents while her husband was away at sea. 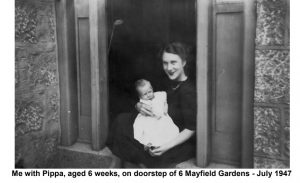 She now lives in Plymouth where she’d returned in 1990 after Jimmy died. She then studied English at GCSE and A Level, before taking up creative writing and having several short stories and poems published.

When I was a child one of my favourite books was Joyce Lankester Brisley’s Milly-Molly-Mandy Stories. Milly-Molly-Mandy, properly Millicent Margaret Amanda, had a great-aunt and I envied Milly-Molly-Mandy for this. Imagine my delight, therefore, when I discovered that I had a great-aunt of my own! Though there, it has to be said, the similarity ended, for while Mily-Molly-Mandy’s Great Aunt Margaret was a “little, little white-haired lady in a black bonnet and dress spotted with little mauve flowers,” mine was the complete opposite. Not remotely a little old lady, but rather a woman of great energy and full of fun and laughter, my Great Aunt Tonie. 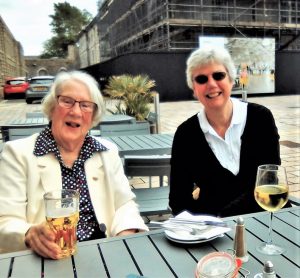 Tonie and Vivien in Plymouth, September 2019

Tonie and my Great Uncle Jimmy seemed very exotic to us. They had travelled the world and had many marvellous tales to tell. Including terrifying encounters with the Triad in China, where, despite living through events that could vie with The Third Man for their menace, they lived to tell the tale. Perhaps even ruthless Chinese gangsters recognised that Aberdeenshire folk have iron in their souls!

Now, very many years later, Tonie has another tale to tell and this is it, Spur of Light, her first novel, completed at the age of 97. A remarkable achievement by a remarkable woman.

Spur of Light is published by Vival Publications and is available from Amazon both as an ebook and a paperback.