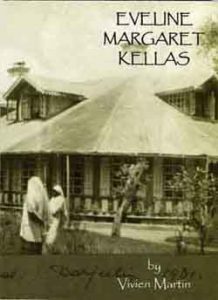 Eveline Margaret Ritchie was born in 1897, the daughter of a Peterhead policeman.  She won bursaries that opened the doors to secondary and higher education.  At Aberdeen University she met and fell in love with John Kellas, son of the minister of Rathen.  Knowing John and his family introduced her to a new world – one that she loved, and in which she thrived.  Her life changed dramatically once more when John was appointed a Professor at the Scottish Churches College in Calcutta, later becoming the College Principal.  For 30 years Eveline and John’s lives were split between Scotland and India, separations caused both by war and their children’s education. Encouraged by Indian friends, they stayed on in India after Independence, until family ties called them home, and John became minister of Glencorse. Eveline still had a further three decades of active and fulfilling life before her and lived to take huge pleasure in her first great-grandchild, Vivien’s daughter Alison.  This is a heart-warming story of one woman’s life reaching across most of the twentieth century.