Transcribed with an Introduction by Vivien Martin 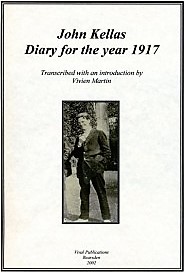 John Kellas was born on 7th July 1900 at the Manse of Rathen, Aberdeenshire, the son of the Rev. John Kellas and his wife Isabella Forrest. From an early age he showed an aptitude for learning, such that when he was sixteen he was accepted for Aberdeen University.  He went to the University with his older brother James.

The diary presented here runs from 1st January to 13th October 1917.  It was fortunate to be preserved, as all John Kellas’ other diaries have been lost, probably during his time in India.  The diary focuses on his personal and social life, but also on his life as a Christian.  There are also references to political events, and to the war which was being fought in Europe.  We also meet Eveline Ritchie, whom he was to marry.

John Kellas graduated MA with Honours in Economics in 1920 and in History in 1921. In 1922 he married Eveline Ritchie, and in the following year was appointed Professor of Economics at the Scottish Churches’ College in Calcutta. He rose to be Principal of the College, from 1944 to 1954.  He then returned to Scotland, becoming Minister of Glencorse Parish Church.  John Kellas died in 1967.

John Kellas’ Diary offers a fascinating and refreshing window onto a student’s life in the early part of the twentieth century.

This book is currently out of print.