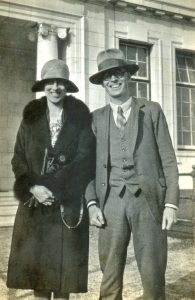 “He was intensely interested in other people’s inner lives.  He read autobiographies, especially diaries.  Not as a voyeur, but rather for reassurance.  From childhood he had feared that his most intimate thoughts and desires were different from those of others.  And when his reading showed him that they were not, he felt that his grip on life had been strengthened, his confidence reinforced.”  [From “Wycliffe and the Scapegoat” by  W.J.Burley, 1978]

I came across this observation recently and was immediately struck by how apt it was.  My cousin Brian had kindly allowed me to read and to transcribe our grandfather’s diary for the year 1917, in which John Kellas describes his thoughts and experiences as a first year student at Aberdeen University.  Reading through it, I found myself not only unexpectedly moved by the tumult of emotions it depicts – as well as sympathetic to many of them – but also “intensely interested”.  In particular, I found I could empathise with his desire for a deeper understanding of Christianity, and with his sense of excitement and overwhelming happiness during the CU week at St. Andrew’s – a week in which he experienced the wonder and joy of growing closer to others who shared his Christian faith.

But religion was not the only thing on his mind!  He was also discovering the delights of being in the company of the opposite sex – flirting with many of the young women who were his fellow students, while also gradually realising that genuine friendships with women were possible.

Sadly, though, all was not plain sailing and he was plagued throughout by “unceasing headaches” which held him “senseless in a vice”  and caused him great pain and distress.  His poor eyesight too was a constant source of discomfort and difficulty, hindering his studies.  Money – or rather the lack of if it – was another problem.  But, in spite of their limited means, John, along with his brother Jim and their friends, managed to enjoy life to the full: whether  debating the great religious and political issues of the time, or revelling in the frequent “At Homes” and other undergraduate social gatherings.

Although highly intelligent, he was nonetheless very young – at sixteen he was really still only a boy.  And it shows in much of what he writes.  At times there’s more than a whiff of adolescent pomposity about it, something of which I strongly suspect we all remember being guilty, and something we too eventually grew out of.  The fact that he was younger than most, if not all, of his class was something of which he was very conscious and often bemoaned in the diary.  It was also something that was noted, to his great chagrin, in the gossip pages of the student magazine Alma Mater.   At times he felt very immature.

It’s interesting to follow the roller-coaster ride of emotional ups and downs that he experiences. Again a characteristic common to young people of this age and one that occurs frequently in fiction.  Take, for example, the lament of the young Michael Berg in Bernhard Schlink’s excellent novel Der Vorleser (The Reader), as he struggles to understand his own ambivalent emotions:

Ich fuehlte mich, als ich jung war, immer entweder zu sicher oder zu unsicher.  Entweder kam ich mir voellig unfaehig, unansehnlich und nichtswuerdig vor, oder ich meinte, ich sei alles in allem gelungen… Geht das allen so?  [When I was young, I was perpetually overconfident or insecure. Either I felt completely useless, unattractive, and worthless, or that I was pretty much a success, and every thing I did was bound to succeed… Does everyone feel this way?]

Everyone probably does from time to time, and John certainly did, swinging from elation to despondency – often over the least thing.  Even so, there are already indications of the man – and the mature Christian – to come.  And not just in John Kellas.  Reading accounts of the high-spirited and often boisterous hijinks of John and his fellow students – whether heckling their tutors, or storming the platform as Ramsay Macdonald tries to speak, or battling against the drunken Medics –  these young men matured both as human beings, and as convinced Christians.  Men whose faith touched all aspects of their lives.  John, Tom Taylor, William Lillie, Peter Noble, John Milne – these rowdy, opinionated students went on to become professors, college and university principals, leaders of great ability and distinction.

And what makes them all especially interesting is the realisation that they were just as human as the rest of us.  They could be just as fallible, just as prone to self-doubt, at times just as insecure and uncertain as any of us.  Yet they too experienced the wonder of each day’s new discoveries as life unfolded before them and friendships deepened.  Humour and delight abounded.

I found this diary not only of historical interest, but also of great personal interest and at the end of it I felt that I had come to know my grandfather much better than before.  Here we have a young man just beginning to find himself and his way in life.

I hope you enjoy it too!